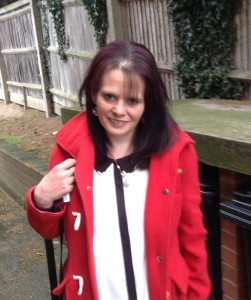 Cancer is a Drag’s Founder met Donna whilst attending several appointments at The Supportive Therapy Unit at King’s College Hospital. We got to know her story and the struggles she was experiencing, on top of her cancer treatment when she contacted us at the charity for support because her washing machine had broken down and she was really struggling to pay her bills with the money she had.

This is the basis of what Donna wrote in her emails;

I’m on my fourth chemo still ongoing, my washing machine broke down last week and basically water went everywhere and it would help me very much for your support as it has been very hard for me. I have had a really bad year; my son was killed by a dangerous driver in August last year and then in January I got mould in my house. My carpet was down so I picked it up and put it on the balcony but then I had an asthma attack. I went to the hospital to get checked out and found out that I had Leukaemia, Within two days I was having chemo. I didn’t think I was going to be able to get help from social services and Macmillan and since then I have had no help whatsoever really, and feel alone. I also have emphysema 60% and can only go five minutes without being out of breath. I have applied for PIPs but have been told it can take over a year so I’m having to get taxis to hospital using my Jobseeker’s Allowance. I still get called for mandatory work programs and I have to keep on sending them forms to prove that I have Leukaemia. So at the moment things are very hard and wondered if you can help me? This is much appreciated, thank you very much, all my love. Donna’

Thank you very much for the cheque I received – it is very much appreciated and couldn’t come at a better time. I had an annual gas check and I’ve been told my old gas cooker is unsafe, it’s leaking. It’s amazing – all the services and charities I was told would help turned me away. And meeting a lovely man Alan at Haematology could! It will be a year on Friday that my son died so if u can say a little prayer it will be much appreciated. Donna.xxx

Sorry it’s took time to reply but thank you. All the cancer charities out there and all the support groups and not one person would help me apart from ‘Cancer is a Drag’. You’ve been a great help and without your support I would’ve been in big trouble with the bank. Also, if I get through this I would love to be a volunteer and hopefully give a little back. All my love, Donna

After our initial support grant we found out that Donna’s condition had deteriorated and wanted to help in any way we could.

The charity wrote to Donna’s Myeloid Clinical Nurse Specialist at King’s who replied;

Sorry it’s taken me a while to get back to you. I only work part time and hard to fit it all in.
Thank you for your care and attention in helping care for Donna. It is much appreciated by us all.
As Donna has given me permission to talk to you I will give you some information that you can share with the committee to consider extra funding. Donna is 41yr old lady who was diagnosed with Acute Myeloid Leukaemia in January this year. She has successfully completed 4 lots of high dose chemotherapy and was in a remission but unfortunately this was short lived and she relapsed very soon after she finished treatment. Because Donna has some other co morbidities this prevented her from having further high dose treatment. She had a further course of low dose treatment with no effect and now is receiving chemotherapy as a continuous infusion to try and control the disease. Donna knows her situation is terminal and life expectance is not very long. Donna is on a low income and is seeking sources of funding so she can take her family away on short break. Two years ago she lost her son in a car accident and feels she wants to spend as much quality time with her living son and daughter as possible. I hope that this is enough information to help Donna with her request.
Kind regards, Janet 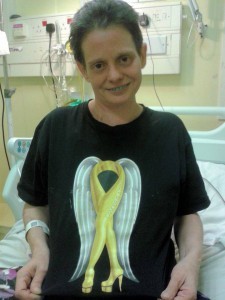 Our Founder decided it was important to visit Donna at this time to offer more support and with permission of her sister we continued to do what we could. Unfortunately, our last visit to Donna was on 5th December 2014 because Donna lost her battle with cancer at 11.00pm on 9th December, 4 days later.
On our last visit Donna gave this £20 note to our Founder. She wanted to repay Cancer is a Drag for helping her. So with the help of her sister, she created a drawing of her body indicating where the tumours were and asked people to donate a £1 to ‘name a lump’. There was no way that the charity wanted to accept the money but Donna said it would make her happy and that she wanted to help others. When we asked Donna if it was alright to post this information she said that we must!

WE NEED YOUR HELP

Can you help other people like Donna? Donating is quick and easy to do