Mitzi, Bingay and Cancer is a Drag

I was just a young girl when the AIDS crisis hit Sydney and suddenly all of my friends and acquaintances were just dropping like flies. First it was that guy you saw across the bar and the next week it was a really good friend so I saw an opportunity to use my passion for performing to help educate and raise money. As time has gone I have realised that AIDS is not the only disease that affects our community. My father died from a skin Cancer and I’ve had many friends who have been affected so when I saw the words Cancer and Drag together I knew this was something I could get involved with. We are part of our community but we are also part of this world and what affects our wider community also affects us so how could I not get involved? I’ll happily turn the handle and roll my glittery balls to help Alan and the charity. 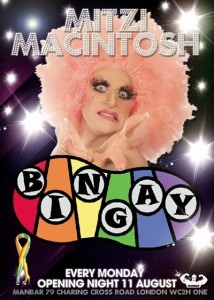 A long time ago in a galaxy far, far away… Well not so much a galaxy as much as the other side of the world and it was 15 years ago. I was working at “The Imperial Hotel” and the manager asked about some ideas for a games night.

We’d had limited success with “Chook Bowling” (until a frozen chicken had ended up under a sofa and rotted) and various other ideas so when the suggestion of a bingo night came up I thought this may be a safe option. As with everything I love a project so decided to do some exhaustive research. I looked at the history of bingo and housie around the world, the different styles of cards, call backs and game play from both the UK and America and put the bits that intrigued me into the format. In 1999 we launched “Bingay” to the world (or the 20 people that rocked up that night) Every week we added little bits. My hunky male offsider left and one of my butch lesbian friends offered to be my right hand man. Our little group of fans started to build up. They suggested some ideas and bit by bit the character of this little night developed. We had wanted the night to help out with fundraising so one of Sydney’s major HIV/Aids organisations came on board and all the monies raised were donated to ACON. Most weeks we were booked out and when I left Sydney in 2010 Bingay had raised over a million dollars for ACON and become an institution with many local fans and quite a few internationally as well. 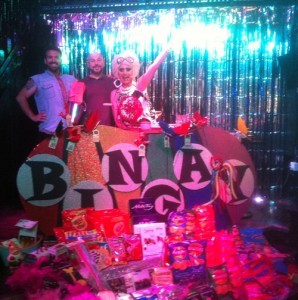 The night is more about the audience and the game than anything. I like to say it’s the most fun you can have playing a serious game of Bingo. The structure means you play more Bingo than you would anywhere else. It’s 5 games in the first half and five in the second with two halves to each game. There are callbacks to join in with, twisted rules, punishments for those that don’t yell out “Bingay” (vagina hat anyone?) but more than anything it’s a great night out with your friends that raises money for a wonderful organisation.

Cancer is a Drag are currently in talks with two new venues for our Bingay relaunch, coming soon this year, so please watch this space and follow us on Facebook! 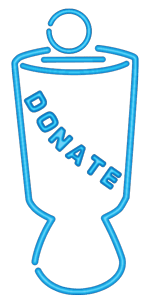